We here at Aussie Records – after about six years or so – have finally upgraded the reference deck.

The trusty Rega RP-1 with the Bias-2 cartridge more recently paired with the most excellent vintage HiFi equipment has been relegated to second string.

There’s a new sheriff in town, in the form of the mighty Rega Planar 3 (P3) in shiny gloss white with the lofty Exact cartridge.

Given how reliable the Rega RP-1 has been over the past half decade, and that the turntable sees a fair amount of action, it wasn’t hard to “stay in the family”, so to speak.

There was a fair amount of research involved (I won’t bore you with that detail), and I’d say there were a few months of investigation into vintage decks (Linn Sondek LP12 etc.) before deciding on a brand new unit. 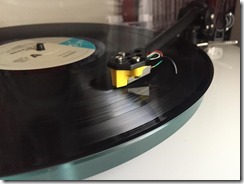 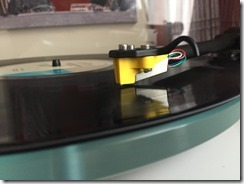 I read many, many reviews on the P3 and arrived at two solid conclusions:

When considering an upgrade, I initially considered the Planar 2, but did a product comparison and realised that for a few hundred dollars more, the Planar 3 offered a lot of return on slim investment.

The tone arm, platter and differences in motor really were all the justification I needed.

However, I was not sold on the mixed reviews for the mid-range Elys-2 cartridge (blue) which typically ships with the P3 with a slight discount.  So I opted to upgrade to the Exact cartridge which is the priciest moving magnet (MM) cartridge in the Rega line up before the far more expensive moving coil (MC) items fit in.   I particularly found this Rega Full Line Comparison chart to be exceptionally useful: https://soundorg.com/content/Rega_Info/Rega-Full-Line-Comparison-Chart-July-2017.pdf

The RRP totals came out to around $1700 AUD however there’s always a little room for negotiation and I managed a bit less than this from my local Rega dealer.

The Rega dealer mounted the cartridge and balanced the tone arm (this is recommended by Rega), but I couldn’t resist a bit of tweaking, so I played a bit with the anti-skating & tracking force.  That was a bit of fun, but at the end of the day, using a digital gram scale meant that I was always going to end up with the tracking force from the stylus that met the recommendation from Rega (1.75g), and I highly recommend one.  Pro tip: slip anti-skating down to zero (0) before attempting to weight the stylus, or it’ll slip off the scale.

The anti-skate, I set to between 1 & 2 which is roughly the manufacturer recommendation.

I played a lot of brand new vinyl (cleaned) to begin with.  This gave me a sense of how much audible improvement the P3 provided over its predecessor, the RP-1.  There was a dramatic improvement in sound clarity and balance between the two channels.  The Rotel amp and the AR speakers handled the new (and improved) signal with ease as the tunes spilled forth from the new deck.

As I started to try different LPs under different conditions & genres, I found that the Exact was less tolerant of dust & debris in the groove, but generally tracked with better accuracy and sat in the groove better than the Bias-2.

Eventually, I arrived at my own personal mea culpa: an original US mono copy of The Velvet Underground (FWIW, a Emerson torso) which I bought without asking about the disc’s condition.  for my sins, I received a copy that has excessive jumps on the B-side initial track (Heroin) but otherwise plays with no fuss and minimal audio problems for the rest of the B-side and the majority of the A-side.

I’d like to say that somehow the P3 magically ignored the devastating scratching and effortlessly plucked through Heroin on the B-Side, but it did indeed skip in the usual places.  It did overall seem more tolerant of scratches, but it could not perform for me this unlikely miracle.  So the P3 is not infallible, and the condition of any disc you throw onto it will have an impact on playback, but if treated with care and respect, it’ll play its heart out for you in brilliant clarity.

There’s nothing else to do now but go back through 1300+ LPs and listen to them ALL AGAIN.  I should get to it.

In summary though, this has been an inspired upgrade and I would wholly recommend this approach (pairing the P3 to an Exact cartridge) when and where possible.